It was October of last year when I wrote about a Wired story talking about Plaxo Pulse that generated some of theÂ first rumblings of LifestreamingÂ entering into theÂ mainstream.Â Then in January I asked if 2008 would bring Lifestreaming to the masses. Clearly it had now become “Wired” which is a little scary as that sometimes means that something has jumped the shark. But I think in this case we’re not going to see that happen.

Now fast forward a few months later and someÂ major notableÂ events. Just a few weeks ago Facebook releases a site re-design which puts a heavy focus on the activity stream and the recently added abilities to import your data from other services and comment on them. TechCrunch proclaims that it’s The FriendFeedization of Facebook. This change by Facebook single handedly had the ability to turn millions of Facebook pages into Lifestreams overnight. Time will tell whether people start to import other services and whether Facebook continues commited to adding more services and functionality in this area.

Last week brought about the latest major player to throw their hat in the Lifestreaming ring when I discoveredÂ a new service fromÂ AOL called buddyupdates. The new service allows for AOL users to create Lifestreams and share them with their buddies on a website or directly inÂ AIM. Another huge way to expose a giant userbase to Lifestreaming. It’s my opinion that AOL finally realized that the Lifestreaming phenomenon is here to stay and didn’t want to get left behind.Â Just to be safe,Â they also decided to snap up SocialThing a few days later for good measure.Â This appears to be a very calculated move for them toÂ accelerate playingÂ catch up in theÂ Lifestreaming service game. 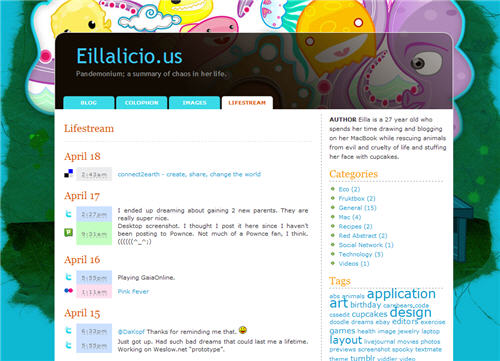 Lastly we must not forget the roots of Lifestreaming. It’s originsÂ are from custom code that allowedÂ us to host them on our own blogs and pre-date any of the services out there.Â Sarah Perez of ReadWriteWeb wrote a great post where she reveals the future of bloggingÂ and proclaims it to be Lifestreaming. Her post discusses and provides examples of how blogs are starting to leverage Lifestreaming functionality to re-invent themselves. Web services don’t provide the flexibility, freedom and data ownership that a blog can for Lifestreaming. I have provided several examples of unique self hosted Lifestreams and continue to write about them while providing information on the tools that make them possible. It’s this area that still excites and captivates me the most and I know we will see some great examples of that moving forward.